Europe and countries of the Arab Gulf share a common neighborhood and many common concerns. Both would like to see the Middle East and North Africa region that is politically stable and economically prosperous, where different religions and ethnicities live peacefully side by side, and where human rights and fundamental freedoms are protected and preserved, Financial Times writes.

One case in point is the nuclear accord with Iran signed in July 2015. Like many others, the United Arab Emirates was skeptical but hoped that the deal, known formally as the Joint Comprehensive Plan of Action (JCPOA), would encourage Iran to moderate its behavior in the region. Unfortunately, this did not happen. Instead of mending its ways, Tehran has pursued a narrow sectarian agenda that is threatening the fragile regional social fabric. The long-term consequences are disastrous.

To fix this problem, we urgently need a concerted international effort to contain Iran’s brazen regional aggression and curtail its dangerous ballistic missiles programme. Just as the international community pulled together to fix the nuclear issue, we now need our international partners, including the EU, to address this challenge.

Some may argue that this is an unrealistic aspiration and that regional security issues never were and never should be included in discussions of the JCPOA and inevitably would sink the accord. The UAE disagrees. Without greater progress on these issues, the agreement is doomed to fail. If we allow Tehran to continue down its current path of aggression, the accord will lose all its value.

What we need is a new accord that does three things: cuts back Tehran’s ability to support extremist groups and sectarian militias across the region; diminishes the ability of the Islamic Revolutionary Guards Corps to bring conflict and destruction to other countries; and limits Tehran’s burgeoning ballistic missile programme to a reasonable level, while preventing it from targeting innocent civilians in neighbouring states.

These are not unreasonable demands, but rather the basic preconditions of cordial relations and better regional co-operation.

This is why the UAE hopes that the international community can apply itself with as much rigor and determination to addressing Iran’s regional behavior as it brought to the nuclear issue. European powers, given their considerable leverage and experience in steering discussions on the nuclear accord, have much to contribute. We are ready to work with our European partners to engage in this process in the service of regional peace and stability for all our benefit.

Despite the recent chaos and instability, there are also some reasons for hope, notably the ambitious reform programme initiated by Crown Prince Mohammed bin Salman in the Kingdom of Saudi Arabia, the effects of which will be felt throughout the region.

These developments deserve the full support of the international community. The EU should do its best to embrace and encourage these changes. No doubt there will be bumps in the road. But rather than remaining focused on narrow policy differences, our European friends should look at the bigger picture and grasp this rare moment in favor of progress and reform.

Tackling the many challenges in our common neighborhood requires close co-operation between Europe and the Arab Gulf. To succeed, we need each other. If we work at cross-purposes, we are doomed to fail. 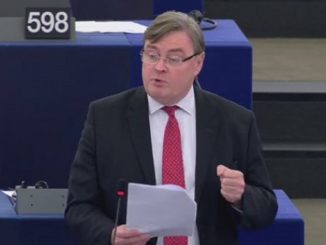